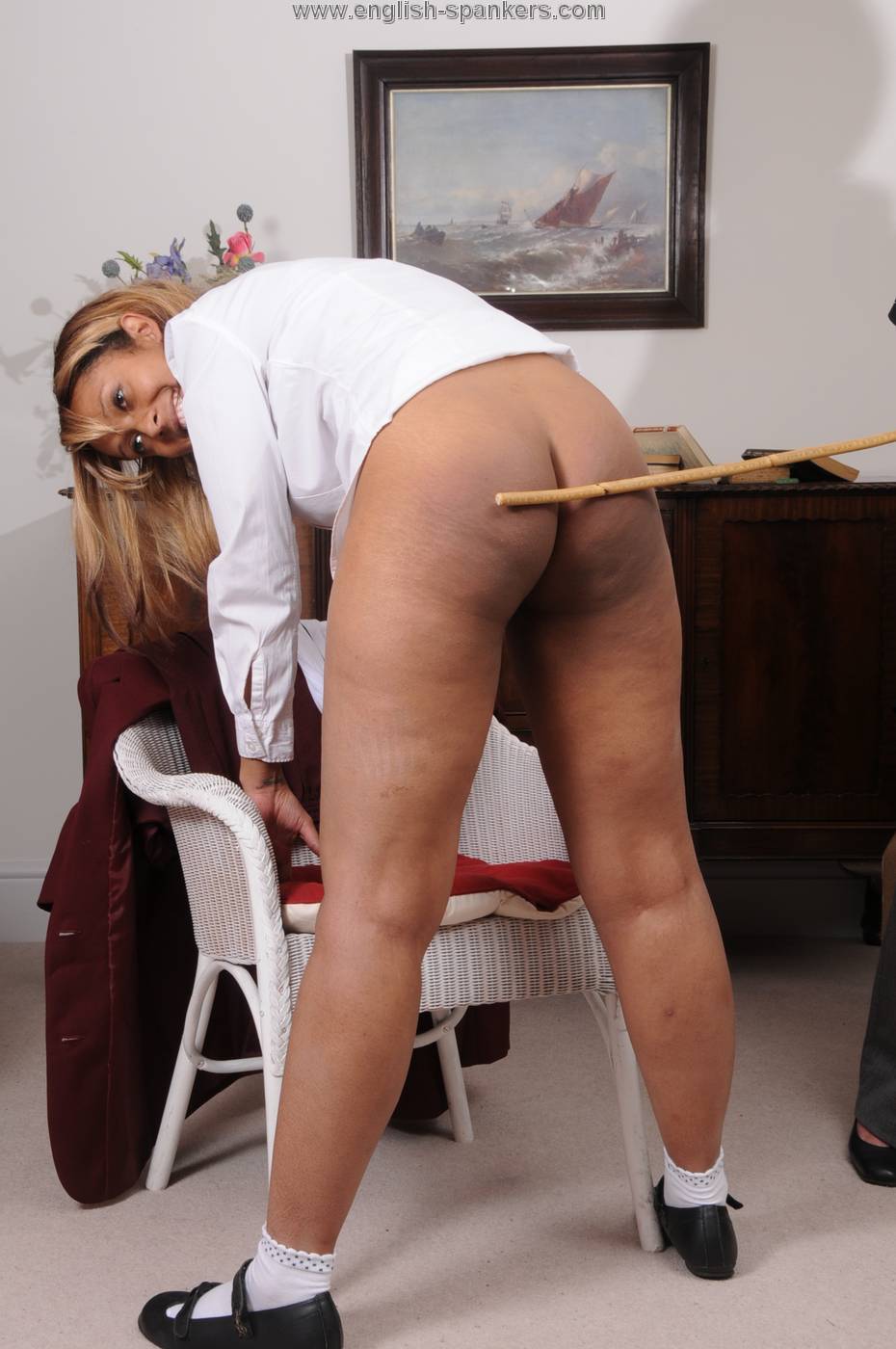 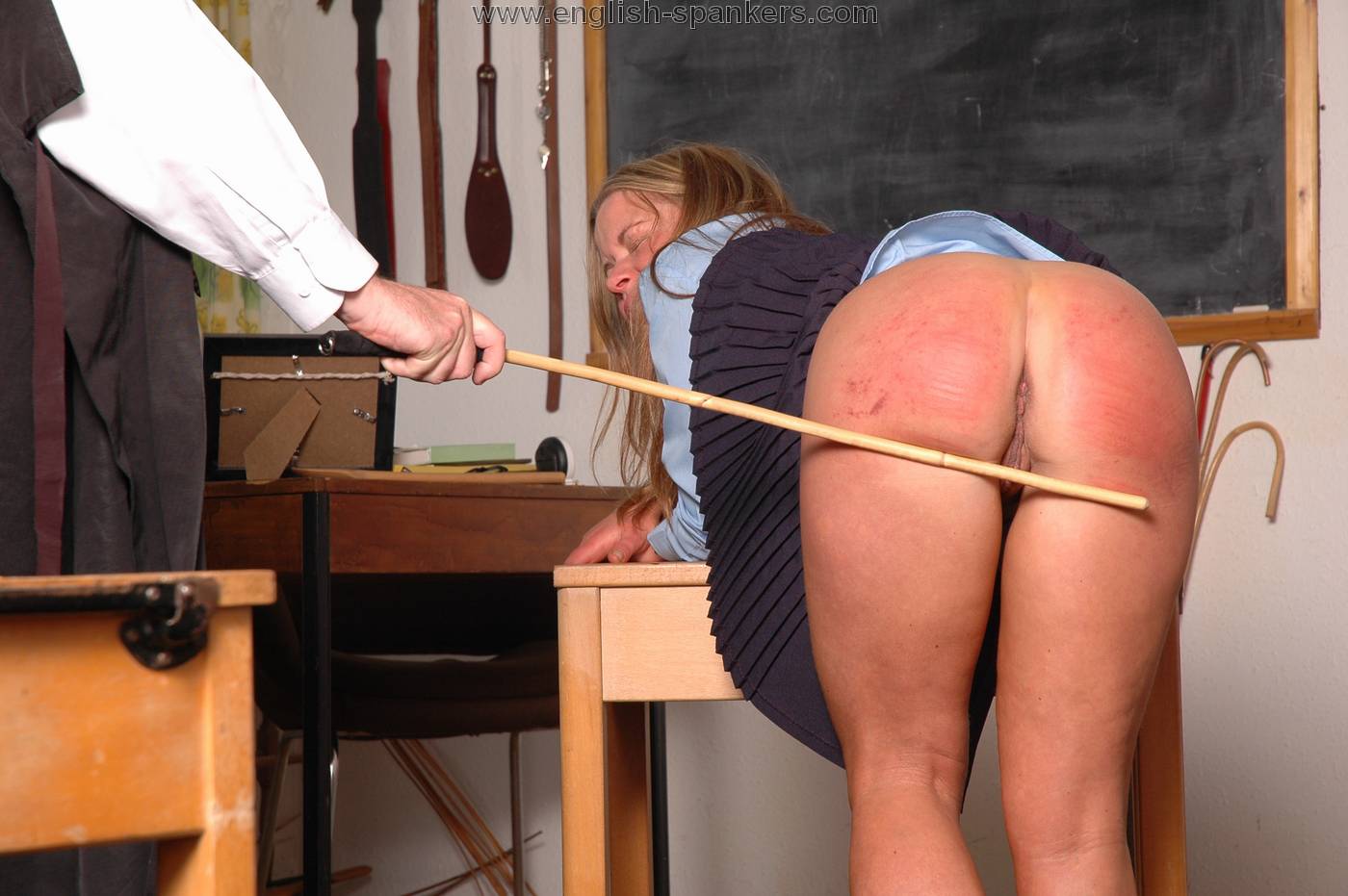 With him standing behind me I felt totally embarrassed as I was very aware that I could be viewed naked from my waist down and was most humiliated.

After again lecturing me for about another three or four minutes he commenced caning, giving all six strokes with about a minute between each one. They stung very much and I can remember thinking I was determined that I would keep out of trouble in the future to avoid this type of punishment.

There was one difference when I was in my last year, however. The senior girls had a different uniform. We had a longer skirt and wore tights instead of stockings.

When you got caned on the bare you therefore had to remove your tights and skirt yourself, fold them neatly, and place them on a chair.

The Head made a point of telling you that tidiness was most essential, and only then would you be told to place yourself over the desk. This is, of course, a typical fantasy for male consumption, but as we have explained in a number of similar articles, fantasy is the main ingredient.

Few people have the opportunity to enact this kind of thing but they have been hooked on it. There has to be some kind of reconciliation.

Schoolgirls themselves are not readily available to male fantasists and in any case are likely to lead to conflict with the law but the image of the girl in her uniform will not just disappear.

Some people, with the aid of a willing partner are able to overcome this difficulty. Take the following account. My wife and I are both twenty-nine and discovered our mutual interest in spanking after some playful bottom spanking soon after we were married eight years ago.

During this time we have gradually developed a system which now acts as a powerful aphrodisiac to our lovemaking. My wife mainly acts the passive role, although sometimes we change round.

She always dresses as a schoolgirl for her punishment and has several uniforms including a pleated green skirt, brief blue mini skirt, short gymslip, many different kinds of knickers, white knee socks, black stockings and a couple of very young-looking short cotton dresses.

She dresses in one of these outfits and then we use a dice to decide the instrument to be used and the number of strokes to be administered.

We have canes, tawses, birches, whips and paddles. Each has a number on it from two to twelve and she throws the dice to choose the instrument.

Then she throws one dice three times to decide the number of strokes she is to receive. Having made these decisions she then bends over the back of a chair with her hands on the seat ready for punishment.

I raise her skirt above her waist and give strokes equivalent to the number of the first throw of the dice over her school knickers.

Then I take her knickers down to below her knees and admire the redness on her bottom which is already showing.

Then she gets the number of strokes which were shown on the second throw of the dice on her bare bottom. So far all these strokes have been given fairly moderately, stinging but not bruising.

Then I remove her knickers completely and give her the last cuts very hard. They are of course the number determined by the last dice throw.

They make her gulp and leave vivid marks. By this time we are really passionate and make long, frantic love.

Sometimes I spank her while we are making love. We find the best position for this is with me on my back and her on top so that I can easily reach her bottom.

By getting the spanks in rhythm with our lovemaking we really increase our feelings. My favourite situation is my wife in gymslip and black stockings with her navy-blue elasticated knickers round her knees displaying her soft white thighs and plump quivering buttocks, cringing in anticipation of the beating to come.

I then love to lay on about twelve strokes with a medium swishy cane. I adore the sound the cane makes as it whistles through the air and lands with a thud on her flesh.

Also the thin red lines which spring from her white flesh at each blow. I try to lay the cuts parallel from the top to bottom of her buttocks, starting close to her waist and ending up at the tops of her thighs.

Another account of corporal punishment involving school uniforms tries to give a more authentic ring to the story by placing the incident in a school setting and also adds some additional spice that would certainly whet the appetites of many connoisseurs of this genre.

Jane and I first met as pupils at a co-ed boarding school in South Africa where discipline was very strict and the cane in frequent use, Over the years both of us felt it on many occasions and took it for granted until the next time.

By the time we were eighteen, we were in love but unable to meet in privacy. One Sunday we broke bounds and met in a nearby deserted farmhouse.

But we were spotted by some passers-by who apparently recognised our distinctive uniforms and phoned the Headmaster. He was soon able to identify it was us who were missing from school and by the time we got back the Head and the senior mistress were waiting for us.

We were given the usual lecture, castigated in no uncertain terms and then sentenced. Jane was to get six strokes of the cane, but I, being regarded as the main culprit for leading Jane astray, was to get twelve strokes.

But that was not all. We were informed that as an additional humiliation for our outrageous behaviour, Jane would be caned by the Head, while I would receive my punishment from the senior mistress.

First, Jane was told to bend over and touch her toes. The mistress then raised the hem of her tunic, lowered her knickers to her knees and then stood back while the Head applied six really hard cuts to her naked buttocks.

I saw her biting her lips with the effort to restrain the sobs that were trying to escape from her lips. Then it was my turn.

Jane had to stand there with her knickers still hanging round her knees and her tunic held up while I had my trousers and underpants lowered by the Head.

The senior mistress then dealt out the twelve stingers to my bare bottom. It was all I could do to emulate Jane by not crying out with the excruciating pain.

When we discussed it later, we both discovered that the sight of each other being prepared for punishment and then caned was so sexually stimulating that it quite overcame the pain we felt.

Although we knew we were taking the chance of another severe caning if we were caught, we could not resist finding an opportunity to examine and console each other.

We managed to find a hiding place and we exposed our whipped bottoms to each other. The sight of Jane lifting her tunic and taking her knickers down was extremely exciting and I could tell that she felt the same way when I showed her my naked buttocks.

Since we have been married we often act out a similar scene as part of our love play and the sight of Jane in gym tunic and black stockings touching her toes with her knickers at half-mast really turns me on.

The second student makes rather less fuss over her eight strokes, but there is still much rubbing of buttocks.

The third girl is exemplary, marching up to the blackboard and taking eight brisk strokes calmly and without demur. A second video scene, also from or earlier, showing four schoolgirls who have evidently been called out to the front of the class to be paddled.

Each in turn stands facing the blackboard and receives five swats from their female teacher on the seat of the uniform skirt.

In this second clip from we see more than a dozen female students in a schoolyard, presenting themselves in the classic Korean "push-up" position to receive a caning across the seat of their skirts.

A male teacher gives them two quick strokes each. This looks like a routine punishment, and the strokes appear to be mild. Nevertheless, some of the girls clutch their buttocks as they stand up after being caned.

In a Korean high school in , a female student is summoned to the front of the class to be caned for being rude and lying.

She is reluctant to come forward and appears to be challenging the teacher, perhaps denying guilt, but he insists. She comes to the desk and is given five strokes of the cane on the seat of her skirt.

She remains standing up for this, rather than being made to adopt the push-up posture which is more usual in Korean school caning. There is nothing jocular about this episode, although the strokes are not especially hard.

The girl holds her bottom at the end of the punishment. In this improved version of the clip, the aspect ratio has been fixed so that the student and teacher now appear the correct shape during the caning.

In a class of younger students, two girls are lightly caned, apparently as they pack up to leave at the end of the lesson. Each comes up to stand facing the blackboard, and the schoolmistress administers five rapid taps with the cane on their school uniform skirts.

This is clearly not a serious punishment. I think the girls' yelling in reaction to it, and holding their bottoms afterwards, is meant as a joke.

Certainly there is laughter, including from the teacher at one point. A short sequence within the item shows a large number of schoolgirls being punished outside their school.

The girls are lined up in a row and have been made to adopt a "push-up" position while a man goes along the line, whacking each girl on her bottom several times with a stick.

According to one source, 40 high-school girls were thus punished altogether, for not taking part in Teacher's Day. We know from other pictures that this "push-up" posture was the norm in Korean schools, both as a punishment in its own right holding the position for a length of time and as a stance for the receipt of posterial chastisement.

The implement being used is much too thick and heavy and rigid to be described as a cane in the British sense. It also appears not to be in conformity with the Education Ministry's rules for CP as set forth in this June news item.

I would describe what we see here as almost "clubbing" rather than caning. The stick appears to be wielded with some force and without very much care; indeed, in Western cultural terms this treatment might be thought to be verging on the brutal.

Storytime: I got CANED in Asia at my Chinese School! OMG!